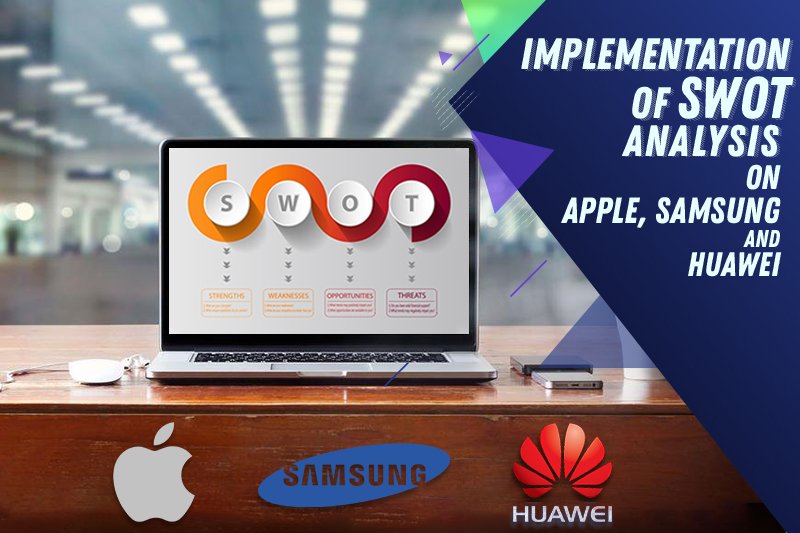 Implementations of SWOT Analysis on Apple, Samsung and Huawei

Well, you all must have smart phones; there is no doubt about it. However, which one do you use or which one do you prefer the most. That is not constant as everyone’s choices are different from each other. Almost 5 billion people on earth are the mobile device owners and half of them own smart phones. So, the industry itself is huge and is showing progress not only in phone Gadgets but many other smart devices too.

In the mobile phone market the competition is fierce and more competitors are spreading their wings in this industry. In 2019, it was observe that Apple had a shift of sales which means the number 1 smart phone is not just number 1 anymore.

Let’s see with the help of SWOT Analysis templates how these three Giants has make possible changes through external and internal factors hindering there progress.

SWOT Analysis of Apple an Insight to what inside it

Strength of Apple in SWOT

Higher prices that led to shift in demand

Opportunities that should be avail not neglected

Threats-something you should definitely avoid

No IPhones Jobs in America

Through the help of the table you can easily identify what the strength, weakness, opportunities and threats. The British Essay Writers have made the concept simples and skimmer just for the students.

Strengths of Samsung in SWOT Analysis

It is considered as one of biggest competitor advantage, as Samsung covers almost every Electronic device or gadget in its product portfolio unlike its competitors.

One of its Kind In terms of Design and Technology

Samsung is the first one to create a beautiful combo of design and technology, with launching dual screen mobiles, 65k TFT/LCD colour phone etc. for the first time.

Samsung enjoys the privilege of having a first mover advantage, through launch of advance features in LCD, refrigerator, air conditioner etc.

Weaknesses of Samsung in SWOT Analysis

Nokia, is still favoured in terms of ease of use, reliability and resale value.

Samsung is not able to meet economies of scale in order to tackle increasing Chinese influence in developing markets.

Too much Dependence on Software

In spite of hard ware leading company, Samsung is unable to control its dependence over software from other parties.

Samsung is subjected to being cannibalised, as once it launched a series of smart phones which caused cannibalisation.

Opportunities for Samsung of SWOT Analysis

Coming up with Unique Proposition

Considering the needs of its targeted audience, Samsung is coming up with a new air conditioning product called Triple Protection Preposition. With this maximum level of customer retention would be made possible.

By investing in its HR management Samsung can enhance the productivity and performance of its employees. Hence, would give a better transformational accomplishment against competitors.

Being a global brand with strong financial standing Samsung has the opportunity to diversify itself further in Asian and European markets and increase its market share tenth fold.

Getting into Partnerships with Online Service Firms

This sort of partnership will be really helpful for Samsung since it will cover the lacking of Samsung which is of being cost-inefficient in terms of delivering online services to consumers.

Threats for Samsung of SWOT Analysis

After a heated court battle with it’s rival Apple, Samsung has been subjected to sales and reputation decline. Furthermore, it can still bring any future implications.

Samsung is subjected to severe competition, it’s competitors are competing ferociously to become a technology leader in the world, therefore in this case these are constant threat for Samsung.

Since the world has become more digitally oriented, concerned governments have started to issue regulations and guidelines restricting companies around the globe with its legal obligations. Therefore, Samsung can’t be exempted from such obligations and failure to comply may result in final downfall.

Since higher the operational cost higher these two costs, resulting in becoming a threat for acquiring efficient supply chain management and human resources. Whereas, this threat has become more serious since Chinese markets are meeting economies of scale much efficiently.

Swot analysis of Huawei the next generation smart phones

The mobile phone industries are becoming more and more infatuated by the customers. The customers are very much depend on these smart phones and have every minor information about the new features update. The best essay writing services in UK has list down the SWOT Analysis of Huawei that can easily be understandable for students.

Strengths of Huawei of SWOT Analysis

This has enabled the company to scale up and scale down according to market demand.

Huawei has invested in training of labour to that extent where it can become a competitive advantage to its competitors.

Strong Relationships with its Dealers

Have such a good relationship with its dealers and distributors that not only dealers invest in training their staff to do more sales for Huawei but to also spread brand awareness among consumers.

This helps Huawei in expanding its market share and in developing new products.

Weaknesses of Huawei of SWOT Analysis

Due to this lacking Huawei missed many opportunities and suffers from inventory surplus both in-house and in channel.

Due to this competitors can attack Huawei in this regard, thou product is good but marketing strategy needs to be considered wisely.

This rate is much higher than it’s competitor’s employee turnover, therefore Huawei invests so much in training that it is affecting it’s cost management.

Due to this Huawei has lost small market Shares in many niche segments.

Opportunities for Huawei of SWOT Analysis

Utilizing it's cash in the bank can open up new ventures in terms of technological revolution and expanding into new markets through launching various product categories.

It can aid in becoming cost-efficient, increasing profitability and passing on benefits to consumers to gain further market share.

Through developing new markets in already established markets of competitors, Huawei will be able to create a competitor advantage.

Use of New Technology

Threats for Huawei of SWOT Analysis

Movement like $15/hour and rising pay level has increased the labour cost in-home and manufacturing hub of Huawei this could impact the cost management hence the overall profitability of Huawei.

If Huawei doesn't come up with new products in the market then it could face a serious threat of diminishing sales.

This can impact the profitability of Huawei in long-run.